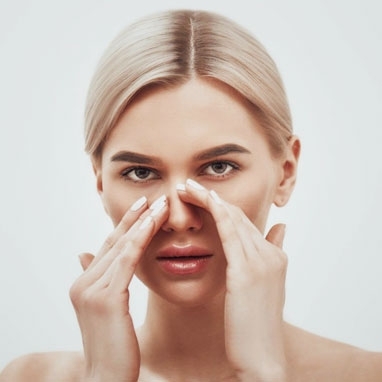 If you experience nasal obstruction, decreased sense of smell, runny nose and snoring, and feel the need to breathe through the mouth, your respiratory tract may be filled with nasal polyps!

What is Nasal Polyp?

“Nasal polyp” is the formation that may occur in all mucous structures covering the nasal passage and sinuses, are not malignant and have a tear-drop shaped form. Nasal Polyps may result from asthma, recurrent infection, drug intolerance, various immune system disorders and allergies. As the polyps grow, they block the airway, causing breathing problems, decreased sense of smell, and recurrent infections, but small nasal polyps may not cause serious complaints in patients. The prevalence of nasal polyps generally increases in adulthood, but they may also occur at early ages. Although nasal polyps can be medically treated, only surgical options should be considered in some cases.

What are the Symptoms of Nasal Polyp?

Nasal polyps are generally formed in the area where the bones of the eyes, nose and chin intersect. These structures, which may not lead to any complaint if they are small, mechanically block the air flow through the nose when they grow and cause nasal obstruction. Nasal polyps, which may also cause asthma attacks and chronic sinusitis due to nasal obstruction, may trigger symptoms such as runny nose, headache, snoring, sleep apnea, sore throat, prolonged cold and flu, decreased sense of smell, feeling pressure in the face or forehead.

Why Nasal Polyps are Formed?

I perform nasal polyp surgery through the nose with endoscopic method thanks to advancing technology today. I clean all the polyps on the mucosa covering the nasal passage and sinus cavities with a special device called debrider by using closed technique without incision and suture with the help of endoscopes with a light and camera at the end. I combine nasal polyp surgery, which is applied under local or general anesthesia, with functional endoscopic sinus surgery if necessary. I can state that the success rate of nasal polyp surgery is quite high, but this rate decreases if the patient experiences health problems such as asthma, allergy, aspirin sensitivity or cystic fibrosis. The surgical recurrence rate may increase in the presence of conditions such as cystic fibrosis.